A self organised unconference for anyone with an interest in services in islands, wherever they may be (including the big one with Cardiff, Edinburgh, and London on it); and for anyone with connections to islands, however tenuous. Also (in May 2012 and May 2015), an opportunity for visitors to Orkney to see puffins!

(There will also be an island visit, and/or bus tour in Orkney on Friday 29 May 2015, for govcampers travelling to Orkney who can arrive a day or 2 early.)

IslandGovCamp in Orkney (and online) in May 2015 will be hosted by the digitalOrkney Forum (formerly known as the Orkney ICT Forum), and will use the hashtag #IsleGC15

The main govcamp sessions will be held at Kirkwall Grammar School (and online) between:


If you can travel to Orkney (rather than participating online), and would like to do so a day or 2 early, there will be a bus tour or island visit from:

(the itinerary will be crowdsourced, in some way, and there may be admission charges, and/or ferry fares to pay)


Tickets will be available soon.

For up to date information as plans develop (and lots of links and other material), keep checking this blog, and see:

What is IslandGovCamp?
A self organised unconference for people with an interest in using digital design and digital tools to improve services in islands, wherever they may be (including the big one with Cardiff, Edinburgh, and London on it); and for anyone with connections to islands, however tenuous. Once again, like IslandGovCamp 2012, this may be opportunity for visitors to Orkney to see puffins (no guarantees, but at least one govcamper saw at least on puffin in May 2012!) 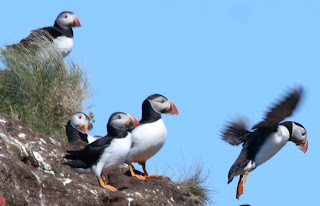 We hope this year to collaborate with the the people at the Orkney International Science Festival (which happens every year in Orkney in September), and other organisations in Orkney and elsewhere, to come up with some suggestions for broad themes which might suggest possible sessions for govcampers to pitch (not that ideas are usually in short supply in Orkney, or at any govcamp I've ever been involved with!)

How can I find out more?
Read the rest of this blog post! Queries? Raise them in a comment below, or by twitter or Facebook. Please also feel free to email queries, suggestions, offers of sponsorship or other observations to: info at digitalOrkney dot com

What will happen at IslandGovCamp?
That will depend on who participates! Roughly speaking, though, this is the suggested timetable:

Thursday 28 May 2015: Visitors to Orkney might start to arrive (possibly on the Aberdeen to Kirkwall ferry, on the Scrabster to Stromness ferry, the Gills Bay to St Margaret's Hope ferry, the John O'Groats to Burwick ferry, or by Flybe/Loganair flight from most Scottish airports.) 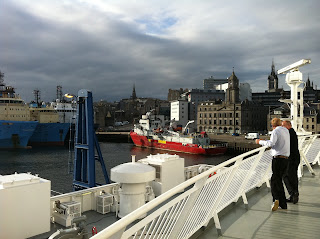 
Friday 29 May 2015: Those who wish to might spend the day discussing possible govcamp topics, either online or in Orkney (or even while travelling to Orkney!) If you do travel to Orkney to take part in person, in the room, Friday would be a good day to explore the Orkney mainland (and possibly another island or 2), possibly taking in Scara Brae, the Ring of Brodgar (and other UNESCO-designated Heart of Neolithic Orkney sites) and the Italian Chapel. The intention is to crowdsource a tour itinerary among those who wish to do some exploring together - we'll probably need to do this online in advance of people arriving in Orkney. (Probably some Orkney-resident govcampers will have to work on this day, and some visitors will just be arriving from Shetland or south, but those who wish to can interact online with some of these activities, and join in in-person when they can). In the evening, perhaps we can spend some time in further discussion in some suitable place, perhaps some of Kirkwall pubs (for example Helgi's, the Bothy Bar or The Auld Motorhoose).

Saturday 30 May 2015: Probably some visitors will still just be arriving on  boats and planes. Those who are participating online won't have much to do until shortly before 1200BST (and they certainly won't get the lunch that will be in the room at that point!). Those who are in Orkney, and wanting to be in the room, will gather from 1200BST onwards at Kirkwall Grammar School, where lunch will be available. We'll use an hour or so to decide what sessions there are going to be, and in what order (in our version of the standard govcamp session pitching process), and then those sessions can run until about 1800BST. In the evening, there will be more discussion, probably with the addition of food (and music, and your choice of wine, whisky, beer, or other drinks) for those who wish to.

Sunday 31 May 2015: At 1000BST (or thereabouts) we will gather again at Kirkwall Grammar School (and online), and have coffee and more govcamp sessions and/or some sort of general question/answer/discussion time until about 1300BST, when we will have lunch. We will also do something a bit more active (in 2012 it was cricket) in the afternoon, for those not rushing home. From then on, those who have to travel home get on their way, and those who live in Orkney can attempt to recover before work on Monday!

Tickets for the lunches and govcamp sessions will be free: depending on sponsorship and funding, other parts of the event might also be free! (HINT: if you can think of possible sponsors, or would like to provide sponsorship (in cash or in kind) please get in touch!).  Unfortunately, it does not seem likely that assistance with travel and accommodation will be possible - but as the event includes a Saturday night, perhaps the cost of getting here will not be too prohibitive.

For anyone who cannot travel to the IslandGovCamp venue on the days of the event, it will be possible to participate over the internet from wherever you are. There will be audio and video livestreaming of as much of what goes on as is possible, and you will be able to ask questions and make comments from wherever you are via twitter.We may be able to provide other digital options for interaction with the event, and are open to suggestions about how to attempt this.

Further advice on travel options, and on finding accommodation, will appear here soon.

Where did the idea for IslandGovCamp come from?
It was inspired by ScotGovCamp in Aberdeen (and TechMeetUp in Aberdeen, and SOCITM Scotland in Edinburgh) in September 2012. GovCamps have been held all over the world in recent years, as indicated in this incomplete wiki list. Govcamps grew out of the concept of BarCamps, and tended at first to have a focus (if that is the right word!) on the pragmatic use of social media and technology to improve public services - more recently the focus has shifted to digital design, innovation and co-production. The important thing about this style of event, though, is that the agenda is set by those attending, with a bit of prior discussion and debate online. It is also the latest in a string of Orkney technology-related events facilitated by members of the Orkney ICT Forum, since 2002.

Who can attend IslandGovCamp?
Anyone! There will soon be a link to an online booking form, and it will be first come, first served. (The only limit will the maximum number of attendees we are able to accommodate at the venue, and the amount of sponsorship or funding available to pay for the lunches. It doesn't matter if you are a technical expert, a front-line public sector worker, a manager, support staff, a contractor, a private citizen, a service user or anybody else - if you have an interest in discussing service improvements with likeminded people, IslandGovCamp is for you! It is hoped that a good mix of Orkney residents, and other islanders (even from that big one with Edinburgh, London and Cardiff on it) and others with an interest in island life will be able to take part.